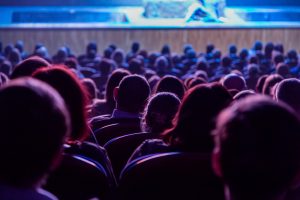 Celebrate the Arts at the Byham Theater

A quick scan of upcoming performances at the Byham Theater may have you envisioning a large, normal concert hall, or a run-of-the-mill movie theater, but here in Pittsburgh we like to keep things interesting. An integral part of the Pittsburgh Cultural Trust, the Byham Theater has been masterfully restored since its original opening on Halloween night in 1904, over a century ago. What began as the Gayety Theater has since taken on various different names, including the Fulton Theater, and presently, the Byham Theater, but along the way the venue never lost its historic charm and attention to detail.

In the 1990’s, the space underwent several phases of renovation to bring it up to modern speed. The restoration included new restrooms, box offices, and a marquee to replace the former lighted Fulton sign that has since been restored and relocated to the State Museum of Pennsylvania to be a part of an exhibit. Subsequent phases of renovation addressed the theater rigging system, and expanded the venue’s orchestra pit. The Pittsburgh Cultural Trust plans to continue renovation and improvements as funds become available. And because a picture says a thousand words, be sure to check out photos and a 360-degree tour here on their website.

If you appreciate the history but are here for the performances, the Byham Theater has got that, too. From traditional ballet to contemporary artists, you can find just what you’re looking for no matter what you’re into. This coming spring, the Byham will host talent from all over the country, including rock and roll hall of fame legends The Drifters, Cornell Gunter’s Coasters, and the Platters, here for one night only on April 11th. For a more classical performance, check out Les Ballets Trockadero de Monte Carlo opening on Saturday, April 13th, and for contemporary music with soul grab tickets to see singer, songwriter, and producer Citizen Cope when he’s in town on April 15th.

For the complete upcoming schedule of shows, be sure to head over to the Byham Theater’s website. Look out for important information on ticket sales, seating, parking, and transportation. We hope to see you there!

If you’re looking to join the Pittsburgh community, contact the Cork Factory today to learn more about our available homes.